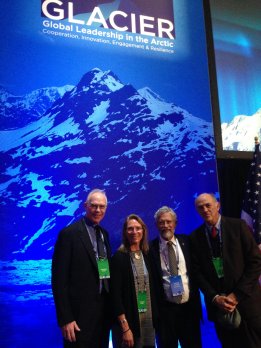 AMHERST, Mass. – In her role as chair of the U.S. National Academy of Sciences’ Polar Research Board, geosciences professor Julie Brigham-Grette of the University of Massachusetts Amherst on Aug. 31 gave one of the few invited scientific talks at the international Summit Conference on Global Leadership in the Arctic: Cooperation, Innovation, Engagement and Resilience (GLACIER), organized by Secretary of State John Kerry. President Barack Obama addressed the GLACIER summit at the end of the day.

Brigham-Grette, whose research area of expertise is the ancient climate in Alaska, Arctic Russia and the Bering Strait region, spoke to a closed session for foreign ministers from several nations with interests in the Arctic plus a few non-Arctic nations at the high-level summit in Anchorage. The session was titled “The Arctic’s Unique Role in Influencing Global Climate.”

She said, “It was truly an honor for me to provide a summary of a number of national academy reports to foreign ministers from around the Northern Hemisphere.”

Brigham-Grette spoke to the ministers about the accelerating concentration of greenhouse gases in the atmosphere, its global impact on the Arctic and how “what happens in the Arctic does not stay in the Arctic.” For example, decreasing Arctic sea ice may be responsible for changes in the frequency of extreme weather events such as floods and fires elsewhere, and melting glaciers and ice sheets threaten coastlines with sea level rise, she noted.

Also, Arctic permafrost thaw has the potential to rapidly release even more carbon into the atmosphere. Brigham-Grette pointed to burning fossil fuels and widespread fires as a factor increasing the impact of black carbon on the reflectivity of Arctic ice, further accelerating Arctic warming.

The U.S. State Department hosted the invitation-only meeting at the direction of the U.S. Arctic Executive Steering Committee in close coordination with the White House and several departments and United States government agencies with Arctic responsibilities.

State Department organizers stated, “This global leadership focus on the Arctic is intended to generate momentum and expedite progress in addressing some of the most pressing issues facing the region.” The summit brought the foreign ministers together with scientists, policymakers and stakeholders from Alaska and the Arctic, including representatives of Arctic indigenous peoples. Participants discussed individual and collective action to address climate change in the Arctic.

The meeting also was intended to raise the visibility of climate impacts in the Arctic as a harbinger for the world, and the Arctic’s unique role in global climate change. Participants identified ways that Arctic innovators are responding to these critical challenges and shared information on opportunities to prepare and respond to other issues in the changing Arctic.

GLACIER took place during the U.S. chairmanship of the Arctic Council, but was not a council-sponsored event. Organizers hope it will help to focus attention on the challenges and opportunities that the Arctic Council intends to address and highlight how a region vulnerable to climate change is experiencing and responding to these impacts, helping to drive political will for ambitious action at the upcoming United Nations Framework Convention on Climate Change (COP-21) later this year in Paris.