Rob D'Anjou's paper in Proceedings of the National Academy of Sciences

US scientists say they can track early human movements by analysing molecules in ancient faecal matter.

Researchers were able to use prehistoric poo to establish the presence and size of a population dating back over 7,000 years.

They argue the method could be used to distinguish human from natural impacts on past environments.

Details have been published in the journal Proceedings of the National Academy of Sciences.

The presence of charcoal from human fires and pollen from cultivated plants have long been used as biological markers of human activity. Often found in lake bed sediments that have been built up over thousands of years, they provide at best a rough guide to the presence of humans.

"Good things can come from the most unexpected places”

Now researchers at the University of Massachusetts at Amherst say they have discovered a much more accurate marker that produces a "strong human signal."

They found that coprostanol, a by-product of the digestion of cholesterol in the human gut acts as a remarkably accurate chronological record of human activity.

At a site just north of the Arctic circle on Norway's Lofoten islands, the scientists extracted the compound from sediment cores that date back 7,300 years.

According to researcher Robert D'Anjou, faeces from ancient humans and their livestock washed into lakes over time and left a record of these specific molecules in specific concentrations. 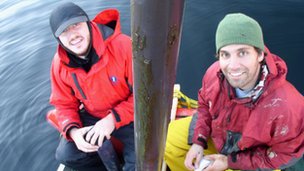 "We compared it to this tree ring temperature record from the area," he told BBC News, "and it was shocking how well the coprostanol followed the temperature reconstruction"

The researchers found that there was considerable variation in human activities in this region of northern Norway over time. There was a significant lull between 2,040 and 1,900 years ago reflected in all markers. There was a further decline in human activity and population around 1750 AD.

Robert D'Anjou says the analysis showed the reasons behind this ebb and flow.

"This area is at the northern limit of agricultural possibility and minor variations in the growing season temperature would greatly affect their ability to farm and populate that area."

And he argues that perhaps the most interesting aspect of the research was the ability to distinguish between human activities from natural events.

"We can define the natural background variability over the 7,000-year record and when we see the peak in human faecal sterols, you see a dramatic increase in the frequency of fires in the area, associated with slash-and-burn type agriculture," said Dr D'Anjou.

It could be a useful tool to help other researchers, says Dr Raymond Bradley, director of the Climate System Research Centre at the University of Massachusetts.

"This approach opens the door to other studies, where the presence of humans is uncertain," he said, "We believe it has great potential for much wider applications in archaeology."

As to the source material, Robert D'Anjou has a highly pragmatic attitude.

"It's just another thing that leaves its mark on the environment," he says, "and good things can come from the most unexpected places."